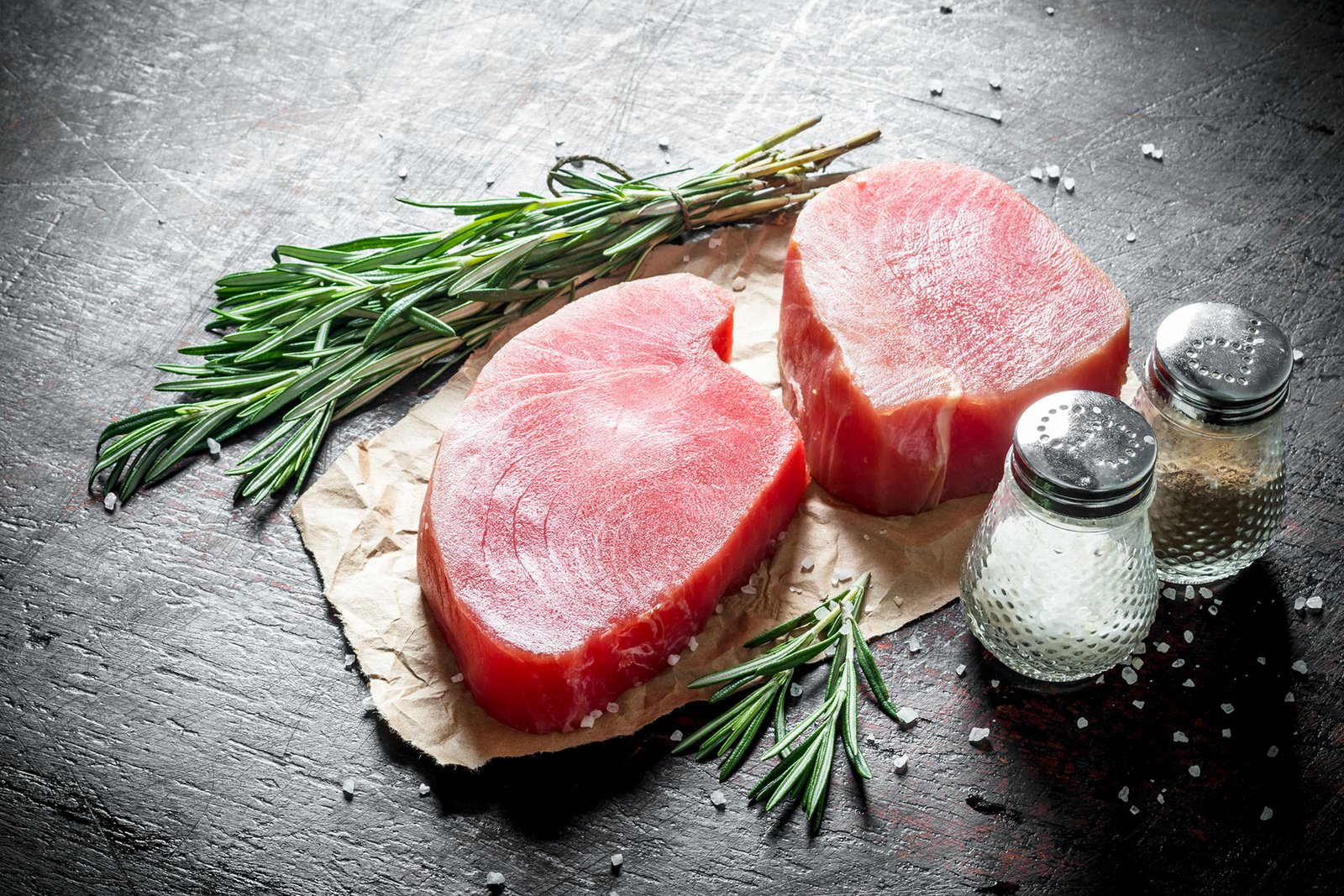 There is much more to tuna than tuna fish salad. In fact, from a culinary standpoint, tuna is truly the king of the sea. It is meaty, versatile and, being full of (good) fat and protein, an important part of the diet for many people throughout the world. There are many different species of tuna, it can be prepared in numerous ways, and it plays an important role in the cuisines of many different countries. Find out more about this regal fish and how it can play a part in your own culinary adventures.

Tuna (also known as “tunny”) are fish that belong to the tribe Thunnini, a subgroup of Scombridae (the mackerel family). The tribe consists of five genera and 15 species, most of which fall under the genus Thunnus. Probably the two most important types of tuna from a culinary standpoint are the bluefin, with its red fleshy loins that are sliced to make steaks or cut into small strips to use as sushi, and the albacore, which becomes pale and flaky when packed in a can. Tuna migrate throughout the world’s oceans and can swim incredibly fast, clocking in at up to 75 miles per hour. They are the only fish to maintain a body temperature higher than the water temperature they are in, and the largest of the tribe—the Atlantic bluefin tuna (Thunnus thynnus)—can weigh up to 1,500 pounds.

How to Cook Tuna

Tuna can be cooked in many different ways: grilled (rare, please), broiled, skewered, ground up for burgers, seared and sliced over a salad, or baked into a casserole. Some of the best ways to prepare it include not cooking it at all, as in Japanese sushi and sashimi, Italian carpaccio, or South American ceviche. And tuna takes remarkably well to preserving by smoking or salt curing, as well as canning in oil or water to make tuna fish salad, tuna melts, and tuna casseroles.

Note: Tuna gets dry and grainy when overcooked so, if searing or grilling, it is best to use thick (approximately 1.5-inch) steaks and keep them rare to raw in the center. But this is a question of personal taste.

Tuna tastes quite different depending on which species it is, what form it takes, and how it is being used. However, there are some basic characteristics that follow through its various manifestations. Tuna is meaty and dense, with an almost creamy melt-in-your-mouth texture when raw, rare, or packed in oil. The flavor of fresh tuna tends toward sweet and saline; it displays a pronounced fishiness when preserved, but the sweetness and creaminess return when mixed with mayonnaise, cheese, or cream.

While tuna comes in many forms, the big divide is between fresh and preserved. Fresh tuna, like any fresh fish, is extremely volatile. Once caught, it must get to market as soon as possible (and be stored under ice aboard ship until reaching port) and be handled with great care. As soon as the fish is out of the water, the clock starts ticking, and it only accelerates as the fish is broken down and sliced into portions at a retail outlet.

There is nothing to beat an impeccably fresh tuna steak grilled rare, with squeezed lemon and a drizzle of extra-virgin olive oil. But this is not always possible. Dating back to very ancient times, when people were lucky enough to catch a huge tuna, they were not always able to eat the entire thing and so developed techniques of preserving it in salt, smoke, or covered with olive oil in a closed container.

While there are 15 species of tuna, and many subspecies, there are four main varieties that you are most likely to come across.

Albacore Tuna is a common variety and has the lightest flesh and mildest flavor. It is frequently canned and labeled as albacore white tuna and sold at a higher price than light chunk tuna.

Bluefin Tuna is the variety of choice for fresh tuna connoisseurs. It has more fat and flavor than most other varieties, and the flesh has a dark red to almost purple color. This is the largest variety, with many fish weighing in at well over 1,000 pounds. Most of the bluefin catch is exported to Japan and sold at a premium price for sashimi.

Skipjack Tuna is an affordable variety that is usually canned as light chunk tuna. It generally has the strongest flavor and highest fat content and is also the smallest variety, seldom growing larger than 25 pounds. As the name suggests, this fish likes to jump and skip over the surface of the ocean and is also is known as arctic bonito or aku. Dried bonito is known as katsuobushi and is widely used in Japanese cuisine.

Yellowfin Tuna, also known as ahi, is less expensive than bluefin but not far behind in quality. Yellowfin is easy to find in the grocery store or fish market. It is deep pink in color and has a more pronounced flavor than albacore. Raw, sashimi-grade ahi is used in poke bowls and sushi rolls. It also takes well to searing and grilling and can be canned as well.

Tuna is an incredibly popular and versatile fish to cook with. Canned or fresh, grilled, baked, broiled, or raw, there is an ocean of culinary possibilities, so take a deep dive into the delicious world of tunny and explore them for yourself.

Once again, the type of tuna makes all the difference. Canned tuna can be stored in a cool, dry place for three to five years or more. Smoked or salted tuna can keep well for six to nine months, maybe even longer if well wrapped in plastic, kept in the fridge, and not opened and exposed to air. Fresh tuna steaks wrapped in plastic can be kept in the refrigerator for a day or two, but the quality declines with every passing hour, especially if you are planning to use it raw or rare. 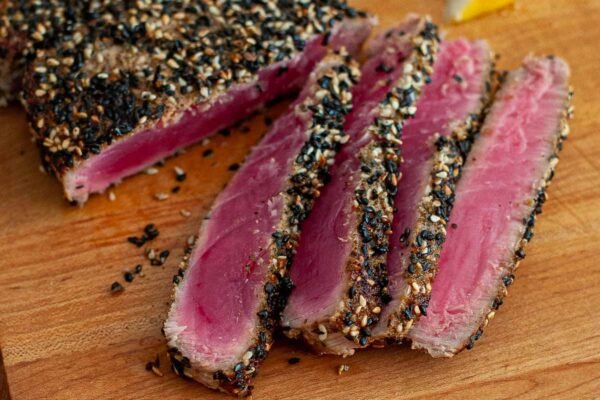 This seared tuna steak recipe is all you will need for perfectly seared sesame crusted tuna. This tuna steak only
More › 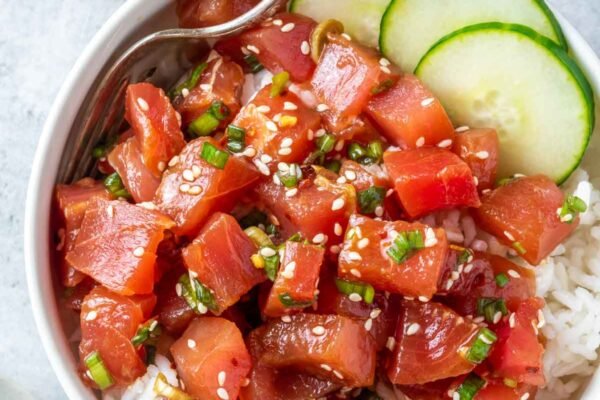 Tuna tataki is a simple Japanese dish that combines delicate, gently-seared tuna with a citrus-soy sauce given a gentle ginger
More ›